Overheating in vehicles. Pros and cons....

I would love to digress a little to a matter that affect lots of car owners nowadays. Newly bought vehicles in Nigeria  90% of the time is faced with the problem of overheating which can be caused a number of things which most times our mechanics handle wrongly...
The first thing to watch out in an overheating car is a leaking radiator, checking if your radiator is leaking is a very easy job if and only if you have been using the correct type of coolant (green or the pinkish type) because if there is a leakage, it exposes it quickly to the user unlike water which dries off immediately it leaks.
A leaking radiator might be as a result of impact on the radiator, an old radiator or possibly a worn radiator cap. Any of these way can easily be detected by just checking for leakages as stated earlier.
Another major cause is if the water pump is leaking or faulty, if it is leaking you might easily see it in some cars but in other you might have to consult your technician for a proper diagnosis.
An overheating vehicle can cause a lot of damme to your vehicle that would cost hundred of thousands  to fix. If by chance you are opportuned to notice any leaking part it is best to consult your technician and have it fixed. 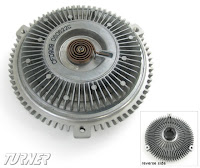 Also, when a vehicle is first bought NEVER allow you rmechanic to remove the thermostat and fix the fan stiff and let it run at engine speed. Why? Letting the fan run at engine speed limit the capacity of the fan to that of the engine whereas, fans on this kind of vehicles are usually viscous fan. Viscous fans runs mainly with air and is mostly found in longitudinally mounted engine where the belt drive is facing the radiator so the fan is partially driven by the engine speed.

"When the engine is cool or even at normal operating temperature, the fan clutch partially disengages the engine's mechanically-driven radiator cooling fan, generally located at the front of the water pumpand driven by a belt and pulley connected to the engine's crankshaft. This saves power, since the engine does not have to fully drive the fan.

However, if engine temperature rises above the clutch's engagement temperature setting, the fan becomes fully engaged, thus drawing a higher volume of ambient air through the vehicle's radiator, which in turn serves to maintain or lower the engine coolant temperature to an acceptable level.
Would continue later . Contact me on 08037835119